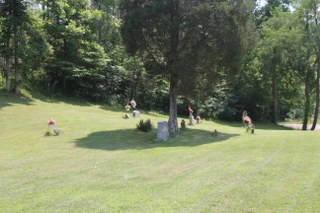 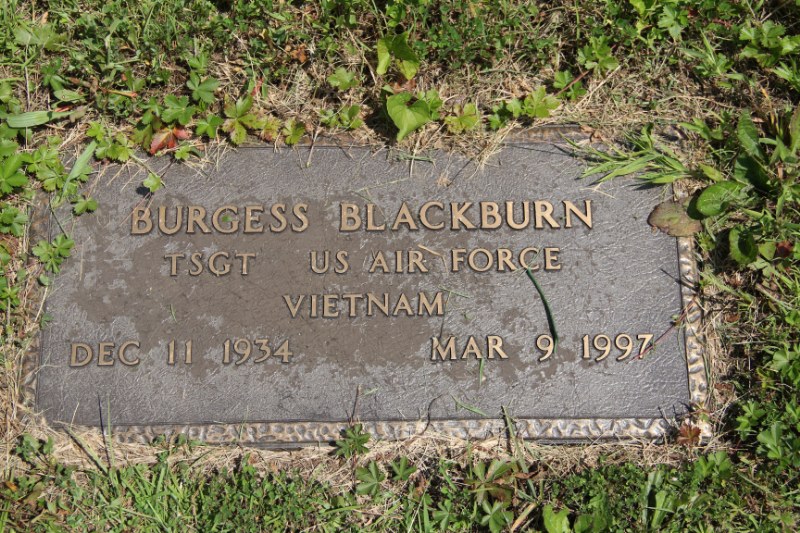 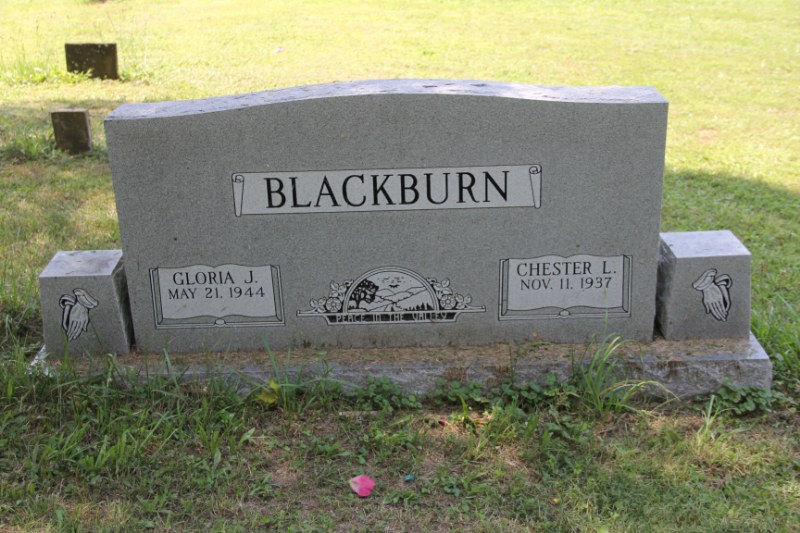 Thelma Bowen Blackburn, 72, of Louisa, died Monday, Apr 26. Mrs. Blackburn was born Jan 2, 1927 in Martin County, a daughter of the late Hampton and Bertha Booth Bowen. She was also preceded in death by her husband, Clifford Blackburn in 1993. She was a homemaker and a member of New Friendship United Baptist Church. Survivors include 2 daughters, Mary Whittaker of Paintsville and Cynthia Preston of Louisa; 3 sons, James Edward Blackburn, Stevie Blackburn and Sidney Blackburn, all of Louisa, 2 sisters, Gladys Horn of Inez, and Lillian Layne of Nitro, WV, 13 grandchildren and 6 great grandchildren. Funeral services will be conducted by Brother John Goble Thursday, Apr 29 at 1 p.m. at Wilson Funeral Home. Burial will be in Blackburn Cemetery, Louisa. Wilson Funeral Home is in charge of arrangements. Big Sandy News, Apr 28, 1999 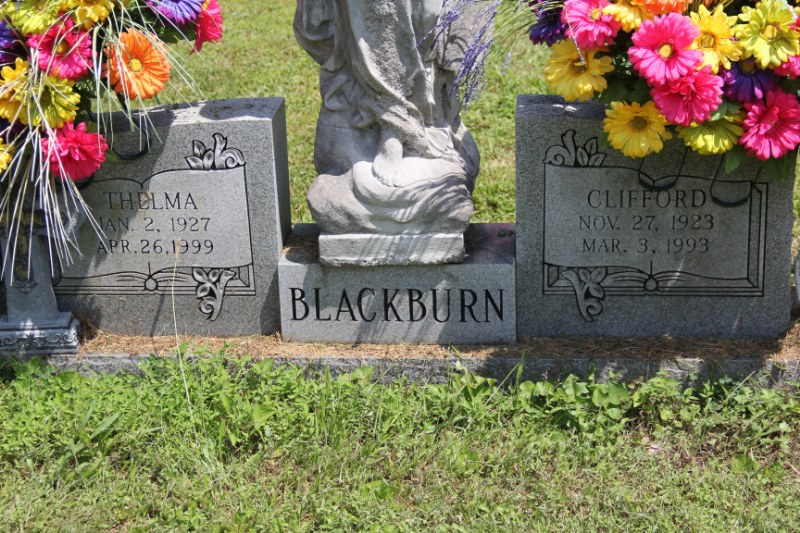 Diana Blackburn, 12, daughter of Mr. and Mrs. Dewey Blackburn, route 3, Louisa, drowned Wednesday night, March 23, in Little Blaine Creek after slipping off a foot bridge. It was the first drowning in this area this year. She was on her way to the home of Mr. and Mrs. Leon Rice about a half mile from her home, when she fell from the bridge which is constructed of discarded six inch oil well casings. Her brother, Hiawatha and her father began a search for the child after she left. they found the body floating in four fee of icy water. The banks at the point where she fell were apparently too steep for her to climb out. She was born April 23, 1947 at Inez, KY, a daughter of George Dewey and Becky Jane Moore Blackburn. Miss Blackburn was a student at Evergreen Elementary School on Route 3. The family moved to their present home from Inez three years ago. In addition to the parents, she is survived by one sister, Mrs. Corliss Slone of Inez, five brothers, Clifford of Inez, G. D. of Rochester, NY, S. Sgt. Burgess in the Air Force at Brunswick, Maine, Hiawatha and Delbert Blackburn, both at home, the maternal grandmother, Mrs. Mary Moore of Warfield, KY. Funeral services were conducted at 11 a.m. Saturday at the Young Funeral Home with the Rev. Buddy Maynard of Inez officiating. Burial was made in Blackburn Cemetery on Route 5, Louisa. Big Sandy News, March 31, 1960 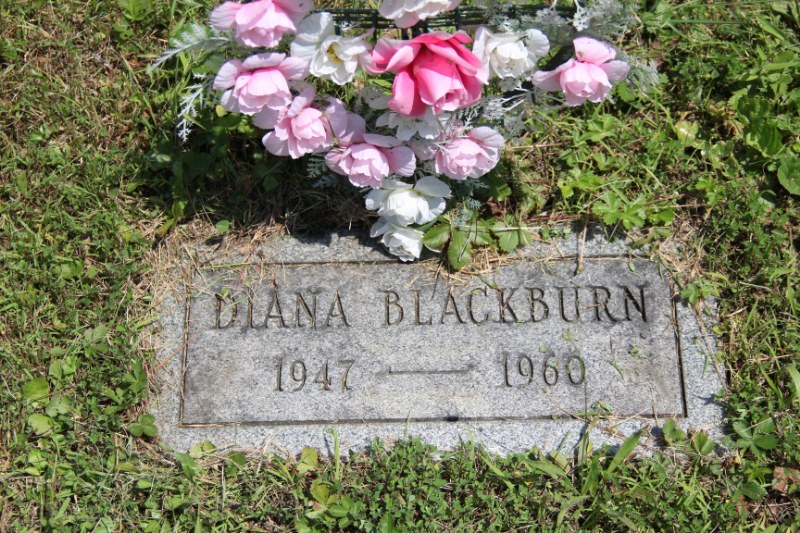 BLACKBURN, George Dewey
1898-1964
George Dewey Blackburn, 65, of Louisa, Route 5, died in a Louisa hospital Thursday morning, August 6, following a long illness. Funeral services were conducted Sunday at 10 a.m. from the home with the Rev. Buddy Maynard of Inez, officiating and burial was in the Goble Cemetery on Louisa Route 5. He was born at McClure, KY, November 27,1 898, a son of the late Rush and Mary Maynard Blackburn, and was a farmer and a member of the Baptist Church. Survivors include the widow, Mrs. Becky Jane Moore Blackburn; a daughter, Mrs. Carlos Slone of Inez; five sons, Clifford Blackburn of Inez, George and Hiawatha Blackburn, Rochester, NY, Burgess Blackburn in the Air Force, and Delbert Blackburn, at home; four sisters, Mrs. Delbert Clay, Mrs. John Mullins, Mar. Virgil McCoy and Miss Vicie Blackburn, all of Inez; three brothers, Foch Blackburn of Louisa, Route 5, Burgess Blackburn of Debord, KY, and James E. Blackburn of Inez and 9 grandchildren and 2 great grandchildren. The body was taken to the residence Saturday from the Young Funeral Home. Big Sandy News, August 13, 1964 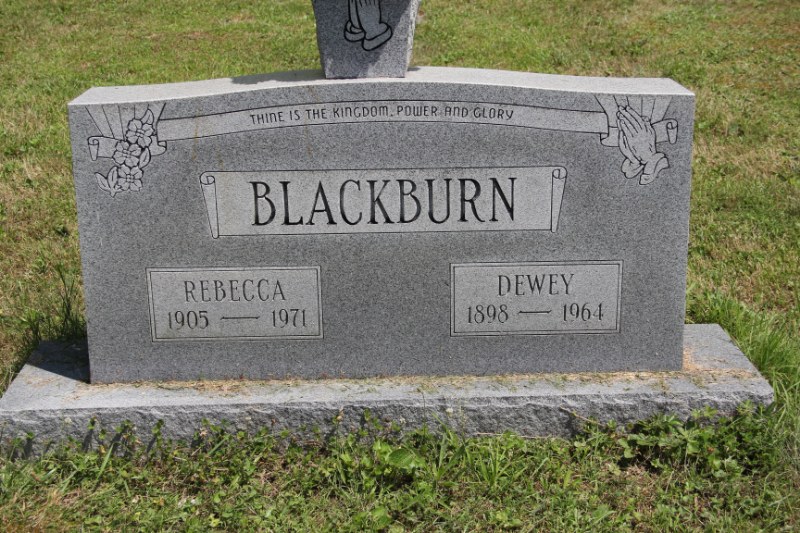 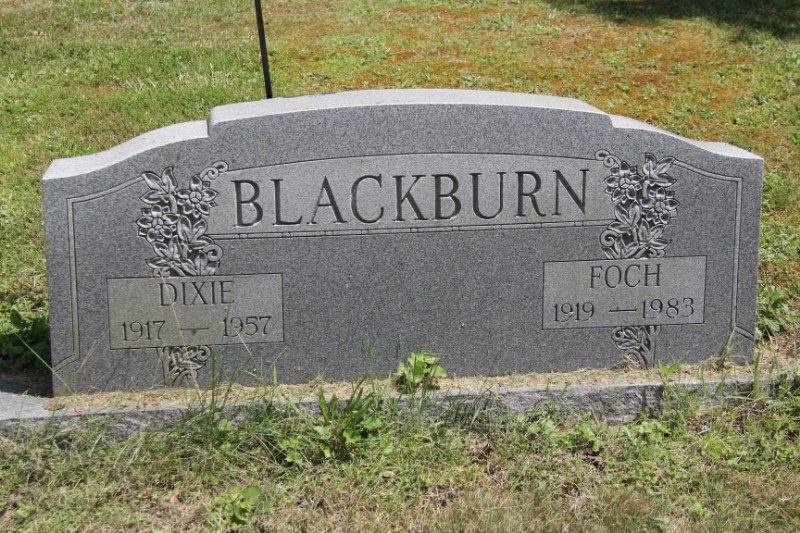 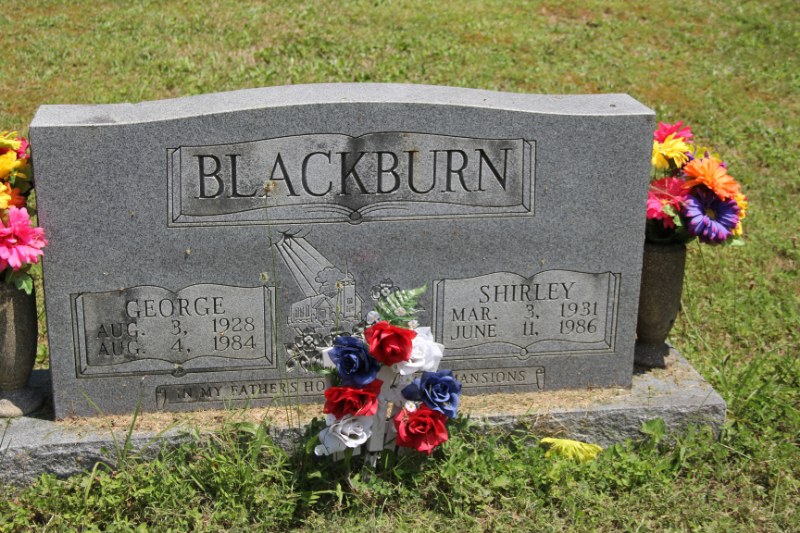 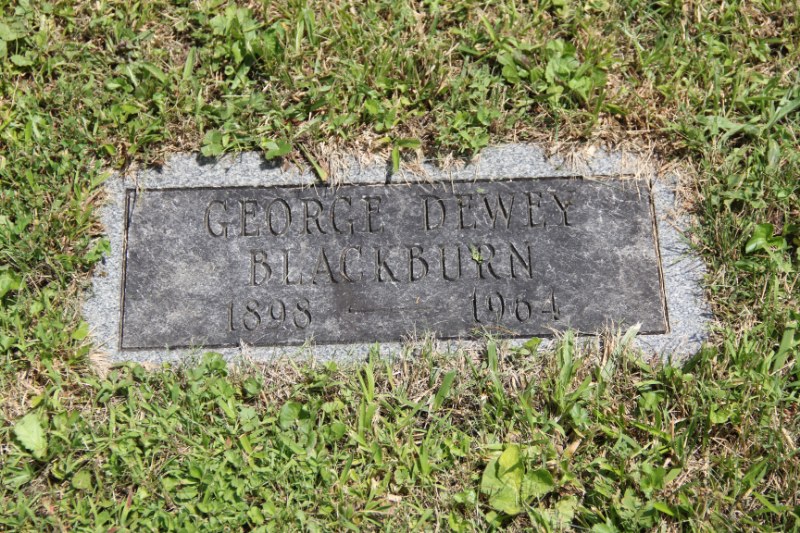 Louisa and Lawrence County suffered the third automobile fatality during the year 1959 when Wallace Blackburn, 17, son of Mr. and Mr. Fetch Blackburn of Route 5, Louisa, was fatally injured early Friday morning of last week when a car belonging to Clifford Frazier in which he was riding failed to make a sharp curve on US 23 in the southern edge of Louisa. The car crashed through the guard rail and plunged over an embankment. the other passenger, Billy Sturgill, son of Mr. and Mrs. Frank Sturgill of Louisa, escaped with only minor injuries. Blackburn died in St. Mary's Hospital, Huntington, Friday, 7 a.m. of a fractured skull. The body war removed to the Young Funeral Home, Louisa and later taken to the Callahan Funeral Home, Inez, KY for funeral and burial rites. A Court of Inquiry, lasting about 5 1/2 hours, was held Tuesday by Judge Nile Ball to determine if there was negligence or law violation in the death of Blackburn. Billy Sturgill, the only survivor of the wreck and several other witnesses were examined and State Trooper Bob Morrison, who investigated the case, said several conflicting statements were made. Sturgill, to whom most of the questioning was directed, will submit voluntarily to a lie detector's test Monday. "If he clears it, so far as we are concerned, the case is over", the trooper remarked. Clifford Frazier, owner of the death car and who was driving Sturgill's car just back of the death car, had returned to Ohio and could not be reached for questioning Tuesday, but will be questioned at a later date.  Big Sandy News, December 24, 1959 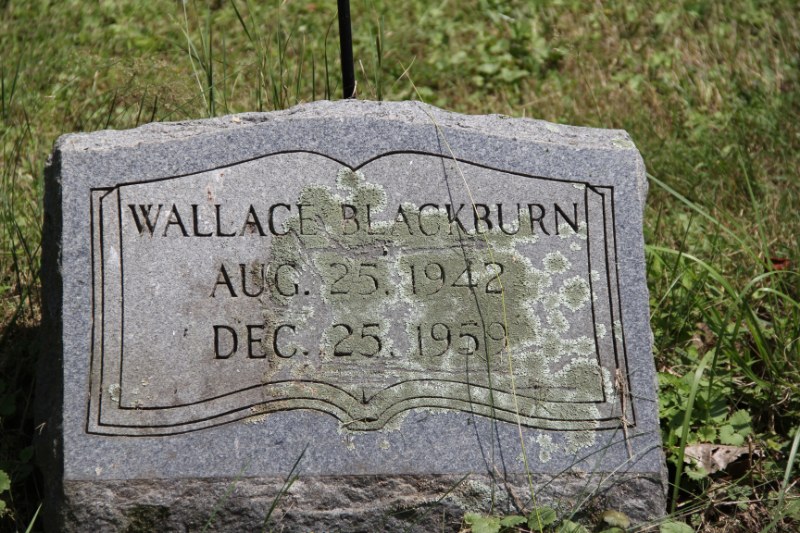 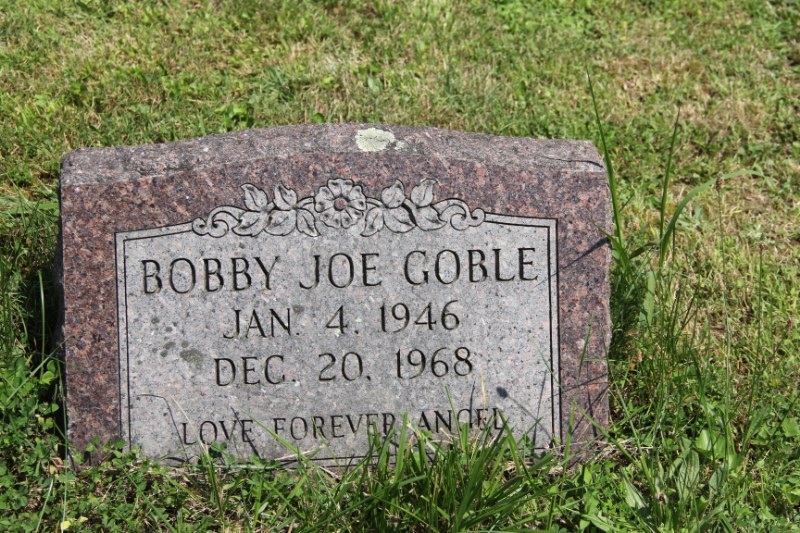 Mrs. Esta Belle Goble, 52, of route 3, Louisa, died in a Louisa hospital at 5:20 a.m. Saturday after in illness of two years. She had been hospitalized three days. Mrs. Goble was born May 13, 1902,at DeBoard, KY, in Martin County, a daughter of the late William and Angeline Delong Smith. Funeral services were conducted at 2 p.m. Monday at the Elizabeth Church at Clifford, KY, with the Rev. Arthur Preece officiating. Burial was made in the Goble Cemetery at Clifford. Surviving are her husband, Lewis Goble, whom she married 34 years ago; four daughters, Mrs. Alex Dotson and Mrs. James Walters, both of Columbus, OH, Mrs. Clifford Smedley at home, and Miss Thelma Goble of Dayton, OH; four sons, David, of Columbus, Benny and Billy Lon and Bobby Joe, all at home; one half sister, Mrs. George Ward of Lynchburg, VA; one brother, Fred Smith of route 3, Louisa, one half brother, Rainley Smith of Prestonsburg, KY. The body was removed from the Young Funeral Home here to the residence at 10 a.m. Sunday. Big Sandy News, February 24, 1955 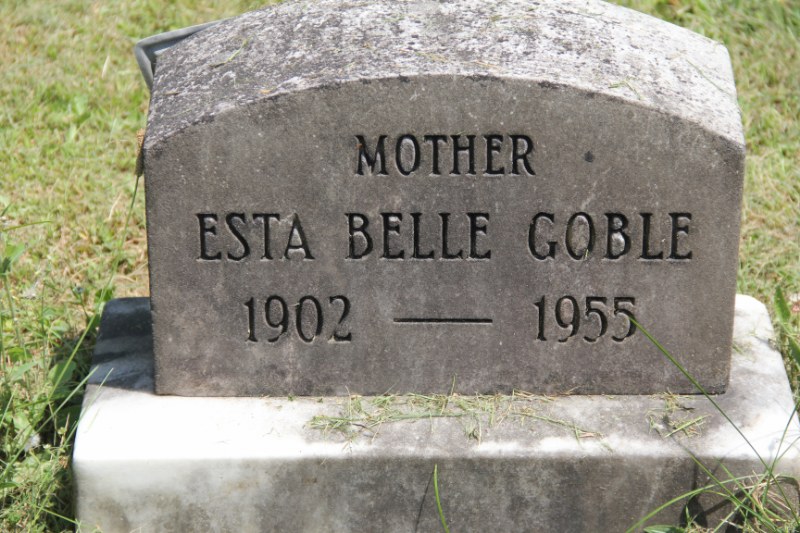 Mrs. Elizabeth Goble, 87 years old, died at her home near Clifford, Saturday, July 12, at 4:30 p.m. Her husband, Jack Goble, preceded her in death 40 years ago. She had been a member of the United Baptist Church for 45 years. Funeral services were conducted Monday from the home with the Rev. Sam Maynard officiating. Burial was made in the family cemetery under the direction of Curtright Funeral Home. Surviving are two daughters, Mrs. Cain Blackburn of Weeksberg, WV, and Mrs. Dave Cassady of Preece, KY; three sons, Andy Goble of route 2, Waverly, OH, Lewis Goble of route 4, Louisa, and Willie Goble of route 1, Webb, WV; one half sister, Mrs. George Harless of Two Valley, KY. Big Sandy News, July 18, 1947 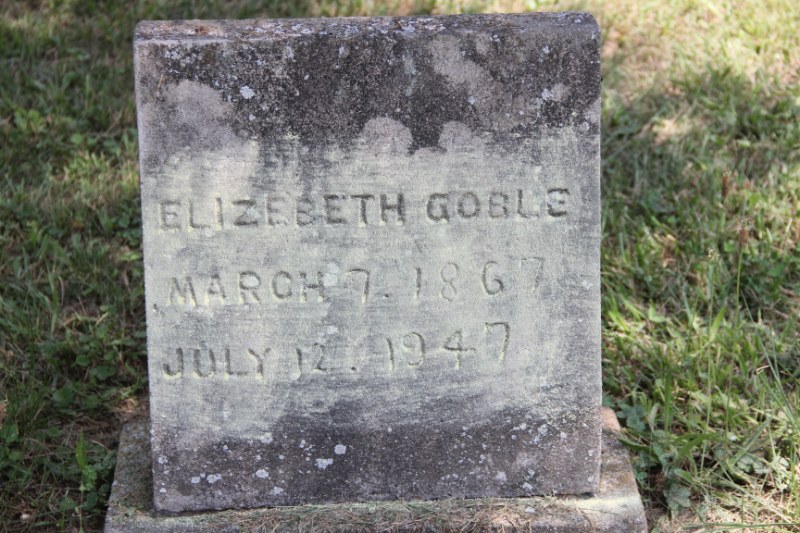 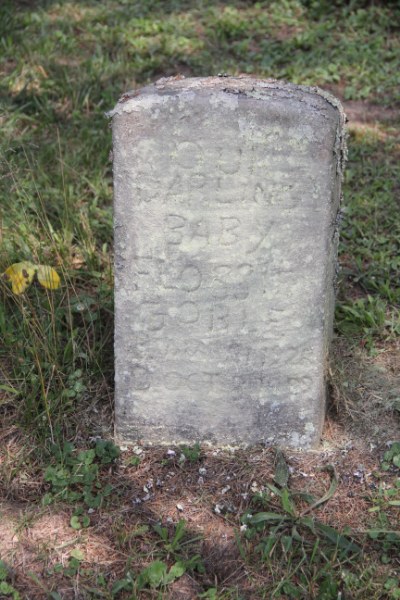 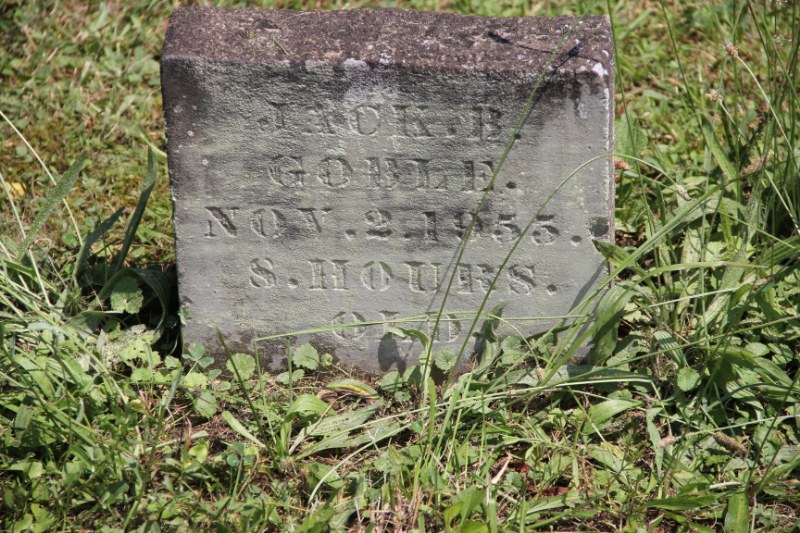 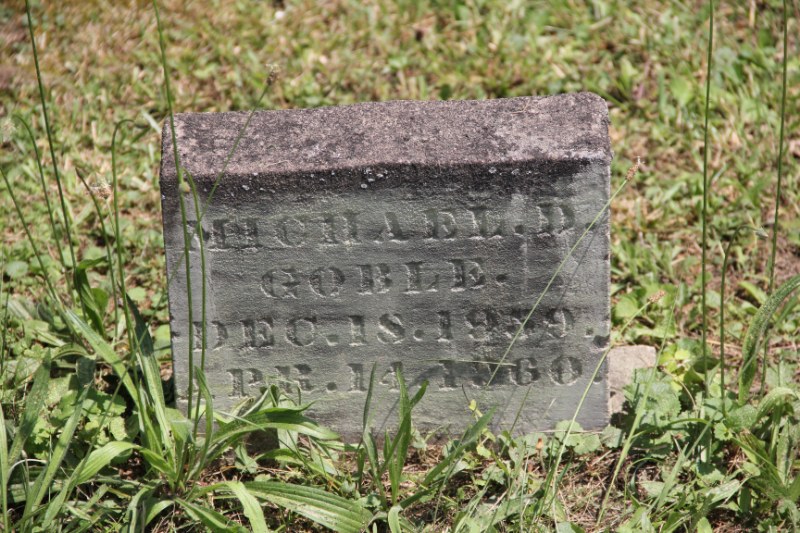 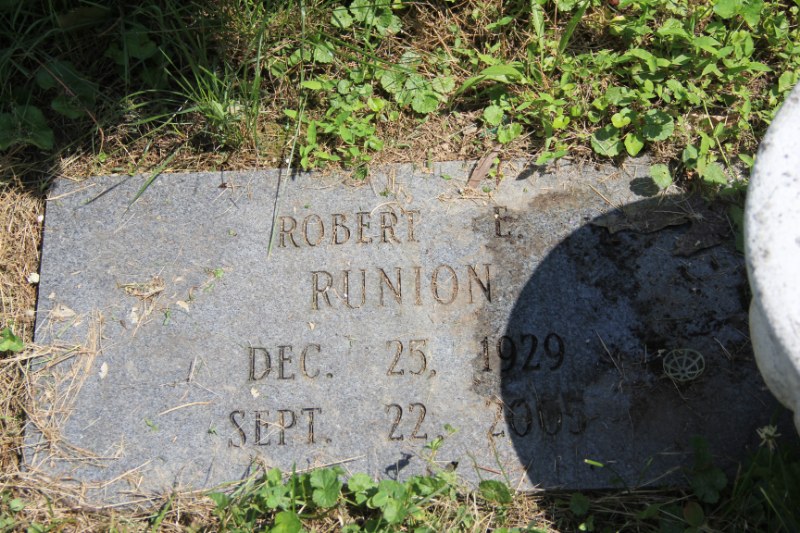 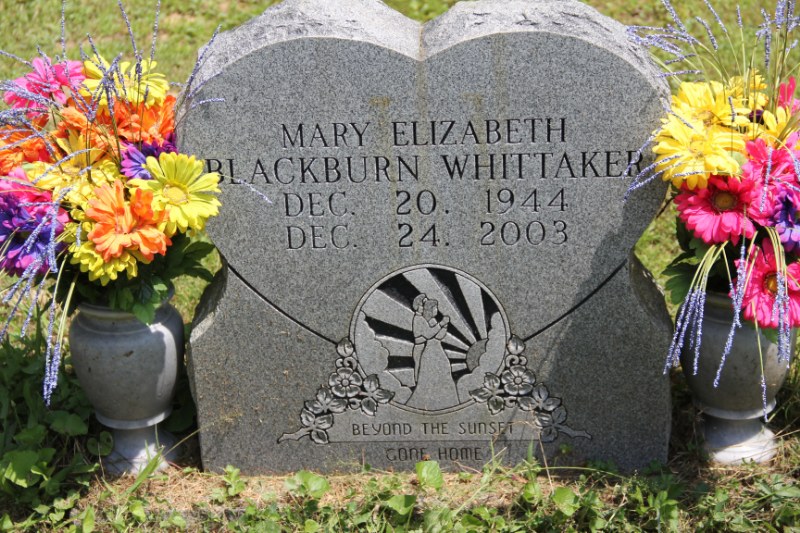