Mrs. Angie Skaggs Bradley, 42, wife of W. N. Bradley, died Sunday night at the Bradley home at Lowmansville following an illness on 9 months. Funeral was conducted Wednesday afternoon at 2 p.m. from the Chestnut Grove Church with Rev. Brack Skaggs, of Lowmansville and Rev. Bird Webb of Ulysses officiating. Deceased, a daughter of Lewis M. Skaggs and the late Hester Griffith Skaggs. She had been a member of the Freewill Baptist Church for 15 years. Surviving besides the father and husband, are 2 sisters, Mrs. Charles Deboard of Greasy Ridge, OH and Mrs. Will Burton of Louisa route 2, and 3 brothers, Charles Skaggs, of Akron, OH, and Burns and John Skaggs of Columbus, OH. Big Sandy News, Jun 4, 1943

Mrs. Elizabeth Edwards, aged about 58, dropped dead at the breakfast table at her home here Tuesday morning of last week. She was the widow of the late Charles Edwards. Big Sandy News, Dec 7, 1928

(Abraham is the son of Gabriel Griffith and Elizabeth See Griffith.  Brother to Evan Griffith.  Nancy is the daughter of Jacob DeBoard and Caroline Wheeler DeBoard.)

(Marked with a funeral home metal marker.  KY Vital Statistics lists him as the son of Farmington Borders DeBoard and Lyda Hatfield DeBoard.  The KY Birth Records lists his birth as July 9, 1922.)

Lowmansville, KY--Mrs. Mary Jane Debord, wife of John G. Debord, who was taken to a hospital at Ironton, OH, a few days ago and underwent an operation, died there on May 26, and was brought back here and laid to rest in the family graveyard beside her 3 children who preceded her to the glory land. She was 38 years of age. She leaves to mourn her absence a husband, 6 children, Roscoe, Oria, Carrie, Willard, Brooksie and Irvin, father and mother, Irvin and Matilda Griffith, 3 brothers, William Marion, John Franklin and Henry; 2 sisters, Mrs. Frank Miller and Mrs. Charley Young and a host of relatives and friends. Big Sandy News, Friday, Jun 3, 1921 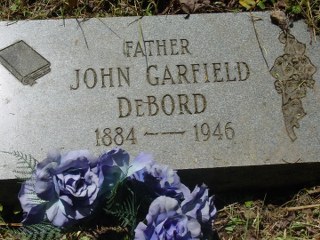 Doris Irene DeBoard, 51, of Galloway, OH, died Tuesday, Jan 13 in Doctors West Hospital, Columbus, OH. Mrs. DeBoard was born Nov 9, 1945, in Rosedale, OH, a daughter of the late Roscoe and Minnie McKenzie DeBoard. She was a member of Amity Enterprise Baptist Church. Surviving are one sister, Mary Fugate of Columbus, 3 brothers, Russell DeBoard of Columbus, John DeBoard of Plain City, OH and Ed DeBoard of West Jefferson, OH and several nieces and nephews. The funeral was conducted Thursday, Jan 15 at Wilson Funeral Home by the Rev. Harold Collins. Burial was in the DeBoard Cemetery. Wilson Funeral Home was in charge of arrangements. Big Sandy News, Jan 21, 1998

(Roscoe is the son of John Garfield DeBoard and Mary Jane Griffith DeBoard.  Minnie is the daughter of Sherman McKenzie and Mima Chandler McKenzie.) 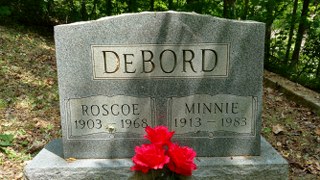 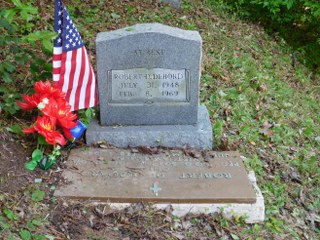 headstone and footstone, no engraving

He was a good
man, full of faith
and the holy
ghost. 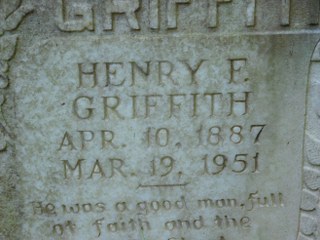 Mrs. H. F. (Vicie) Griffith, 75, of Lowmansville, KY died Friday, July 21, in a Morehead clinic after a brief illness. Funeral services were conducted at 1:30 p.m. Monday at the First Church of God, Lowmansville, of which she was a member. Rev. Tommy Reynolds, Rev. Woodrow Frisby and Rev. Edgar Hullett officiated. Burial was in the family cemetery at Lowmansville. Born September 28, 1891, in Lawrence County, KY, she was a daughter of the late John and Elizabeth Seagraves Debord. Her husband, Rev. Henry F. Griffith, died March 19, 1951. Survivors include two sons, Rev. Scott Griffith of Clearfield, KY, and Ora Griffith of Dayton, OH; and 9 grandchildren and 24 great grandchildren. The Paintsville Funeral Home was in charge of arrangements. Big Sandy News, July 27, 1967 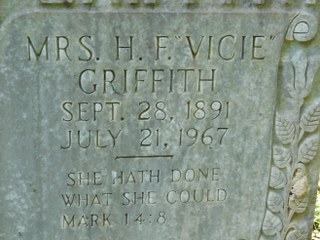 Headstone and footstone (42” apart), no engraving

Matilda Griffith, wife of Irvin Griffith, was born Sep the 5th, 1859, and deceased this life Jan the 15th 926, age 66 years 4 months and 10 days. She leaves to mourn her death her husband, 3 sons, William and Frank and Rev. Henry Griffith and 2 daughters, Mrs. Della Miller and Mrs. Stella Young; a number of grandchildren and a few great grandchildren and a host of relatives and friends. She was converted when she was 13 years old and lived a Christian life and was a member of the New Regular Baptist Church. She suffered with asthma and lung trouble. She was staying with her son, Henry Griffith of Lomansville, this county. She was confined to her bed for several months. Everything was done that loving hands could do, but her time had come for her to go and when the end was drawing near she said “everything is bright and there is nothing in my way and I am ready” and a short time after these words she fell asleep in death. The funeral was preached by the Rev. A. H. Miller at her son’s home and she was buried in the old family graveyard. Big Sandy News, Feb 12, 1926 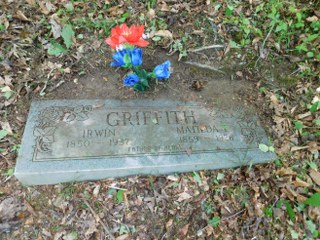 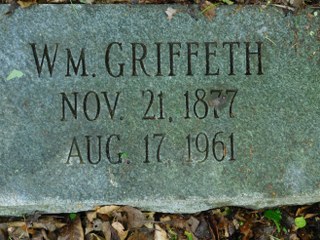 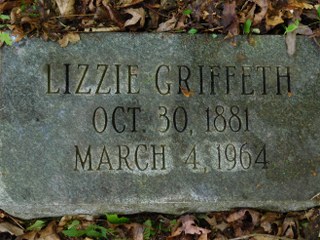 Charles Henry Allen, 56, prominent Catlettsburg merchant and a native of Lowmansville, this county, died in an Ashland hospital Jul 9 of spinal meningitis. The body was brought to this county and private funeral services was conducted last Thursday at the Allen family cemetery near Lowmansville with Rev. Sylvester Ball of Louisa officiating. Born at Lowmansville, Jun 2, 1880, Mr. Allen was reared there. He moved to Catlettsburg 16 years ago. For a number of years he operated the Allen Brothers Store on Louisa road there with his brother Milton J. Allen. Mr. Allen’s death bereaves his widow, Genoa Allen, 2 brothers, Joe of Lowmansville, KY and Milton J. of Catlettsburg; and 2 sisters, Mrs. Allena Chandler of Lowmansville, KY and Mrs. W. W. Brown of Paintsville, KY. Big Sandy News, Friday, Jul 17, 1936 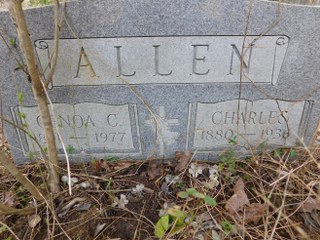 Frank B Allen prominent merchant of Big Sandy Road, Catlettsburg, committed suicide at his home last Sunday morning by shooting himself through the head. Mr. Allen was 54 years old and had been in ill health for some time, and members of the family assign this as the cause of his suicide. Mr. Allen had made his home in Catlettsburg for the past six years and was in the grocery business. Previous to this time, he had lived in the west for 14 years. He was a native of Lawrence County. Mr. Allen is survived by 2 children, Miss Willie Fay Allen, 21, and Everett Allen. Three brothers, Joe, Charley and Milton Allen, all of Catlettsburg and 2 sisters, Mrs. Allena Chandler of Ashland and Mrs. Julia Brown of Paintsville, KY also survive. Mr. Allen’s wife preceded him in death but his parents Mr. and Mrs. James P. Allen of Lowmansville, KY survive. Funeral services were held Tuesday morning from the late residence after which the body was taken to Lowmansville for burial. Big Sandy News-Recorder, Oct 17, 1930 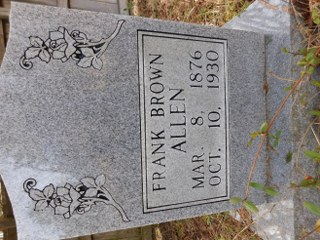 Funeral rites for Mrs. Elizabeth Borders Allen, 92, widow of the late James Polk Allen, who died Friday at her home at Lowmansville after an illness of 4 weeks, were held Sunday afternoon from the Chestnut Grove Baptist Church, Rev. Sylvester Ball of Louisa, officiating. Mrs. Allen, who was a daughter of the late Joseph and Julia Brown Borders, had been a member of the M. E. church for 78 years. Her husband died last June. Surviving are 2 daughters, Mrs. W. W. Brown of Paintsville and Mrs. J. S. Chandler of Lowmansville and 3 sons, M. J. Allen and C. H. Allen of Catlettsburg and Joseph Allen of Lowmansville and one sister, Mrs. Ella Rice of Ashland, OR. Big Sandy News-Recorder, Friday, Mar 23, 1934 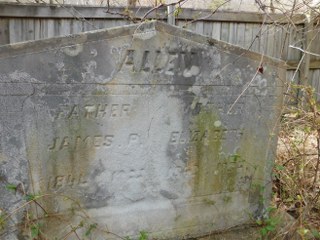 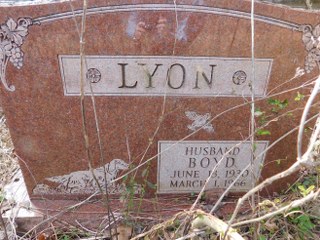 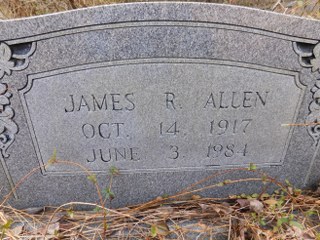 Funeral services were held Thursday, May 27, 1954 at the Regular Baptist Church at Lowmansville for Joe Allen, 76, lifelong resident of Lowmansville, who died at his home Tuesday May 25, 1954 following a long illness. The son of James and Lizzie Borders Allen, he was born April 5, 1878. He was a retired farmer. Surviving are his wife, Nancy Allen, two sons, Darwood Allen, Los Angeles, California and James Allen, Lowmansville, three daughters, Mrs. Ora George, Mrs. Elizabeth Nissley and Mrs. Boyd Lyons, all of Columbus, Ohio, two sisters, Mrs. Jasper Chandlers, Lowmansville and Mrs. Julia Brown, Paintsville. Burial was made in the family cemetery under the direction of the Preston Funeral Home. Big Sandy News, June 10, 1954 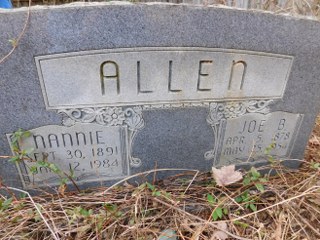 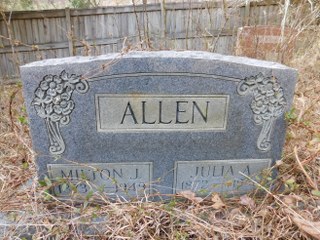