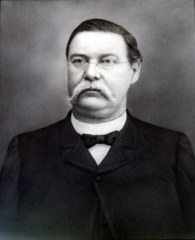 Kentucky: A History of the State, Battle, Perrin, & Kniffin, ed. 8-B Lawrence County

JUDGE J.M. RICE, a native of Prestonburg, Floyd County, Ky., was born February 19, 1831, and is a son of James M. Rice, who was born in Virginia in 1802 and was brought to Greenup (now Boyd) County, Ky., in 1805, by his father, Ezekiel Rice, a farmer of Welsh descent, who settled near Coulton. James M. was a lawyer by profession, represented Floyd County in the Kentucky Legislature in 1820-30, was afterward elected to the Senate from Lawrence County district in 1837, and re-elected in ---[sic]. In 1849 was appointed by Governor Crittenden circuit judge, filled the office until the adoption of the new constitution, and in 1867 was re-appointed. Mr. Rice cast his first presidential vote for Andrew Jackson in 1824; his death occurred in 1870. John M. Rice was reared in Louise, Ky., his father having moved to that point from Floyd County in 1832. At the age of seventeen he began the study of law under his father, graduated from the Louisville Law School in 1852 and was admitted to practice in 1853. In the latter year he settled in Pike County, was elected to the Legislature in 1859, and in 1861 returned to Louisa. In 1867 he was elected on the Democratic ticket to represent Lawrence County district in the Legislature, and in 1868 was elected to the Forty-first Congress; in 1870 he was elected to the Forty-second Congress by a large majority. He afterward practiced law until 1884, when he was elected judge of the criminal court of the sixteenth judicial district of Kentucky.