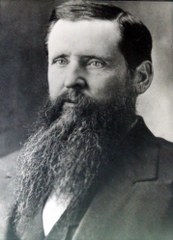 Hon. William C. Ireland is a son of Capt. Samuel D. and Sarah (Crutcher) Ireland, and was born in Mason County, Ky., November 28, 1823. His grandfather, James Ireland, was a native of southwestern Pennsylvania, and came to Kentucky when the latter was yet a part of the territory of Virginia. He was an officer under Gen. Wilkinson in the early Indian wars,and was one of the active and influential pioneers of Mason County. He was a nephew of Rev James Ireland, a distinguished Virginian Baptist clergyman who appeared among the early ministers of his denomination that laid the foundation of their church in Virginia. Capt. Samuel D. Ireland was born in a block-house near the town of Washington, Mason County, August 1, 1798. He commenced boating on the Ohio River before he had reached his seventeenth year, and long before the days of steamboats; and in 1826 or 1827 built the side-wheel steamer "Emigrant," commanding it until it was wrecked in 1832. He then built the "New Emigrant," and ran that boat for some time to Cincinnati, Louisville, and points up the river. Afterward he built the "Cuba," and commanded her for some time, and subsequently partially owned and commanded the "Hunter." In 1845 he permanently quit the river and remained on his farm near Maysville, Lewis County, until his death in 1861.He was a man of large brain and great mental and physical ability, and was greatly liked for his integrity of character. It is quite certain that his ancestors in this country were of Scotch or Scotch-Irish extraction, and appeared in America long prior to the Revolution, doubtless first settling in Pennsylvania, Maryland or Virginia, or in all these States. The orthography of this name may have remained unchanged from the first, but in the Western States one branch, apparently pointing to the same origin, is found omitting the final letter. His mother, Sarah Crutcher, was born in Mason County, Ky., in 1800, and was the daughter of Mathew and Sarah Crutcher, who came to this State from Maryland. William C. Ireland received a good education, chiefly at the private schools of Mason and Lewis Counties, commenced life as a clerk in a store at Maysville, and afterwards had charge of his father's farm for several years. In 1845 he went to Clarksburg, Lewis County, where he studied law and wrote in the clerk's office for two years; in 1848 he was admitted to the bar and at once entered upon practice at Clarksburg. He rose rapidly in his profession, his practice soon embracing some of the most important cases. In 1852 he removed to Greenupsburg, Greenup County, where he established a large and valuable practice, and became one of the leading men at the bar of eastern Kentucky, his practice extending over five counties ,and for many years before the courts of the State. In 1868 he moved to Ashland, and has since resided there, pursuing his profession with his accustomed skill and success. In 1859 he was elected to represent Greenup County in the lower House of the Legislature, and was re-elected in 1861, serving through the greater part of the most important period in the history of that body, especially during the second term of his service; the Legislature of Kentucky was noted for being composed of many of the best men in the State. He took position with the members of that body against the secession of the State from the Federal Union, and became one of the advocates of the necessary measures to sustain the State in its relations to the National Government. He also published several papers ably defending the course pursued by the Union leaders and rejecting the plans of secession as being a remedy for any wrong, but as being the way to the absolute ruin of the State and the impoverishment of her people, and while he remained firm in his position throughout the war and was bitterly opposed to the establishment of a Southern Confederacy, and worked incessantly against it, yet his sympathies were very warm for the Southern people, whose course he believed to be wrong. In 1863 he was elected assistant clerk of the Senate, and served two years in that capacity. In 1874 he was elected circuit judge of the Sixteenth Judicial District, his term expiring in 1880. He was a Whig in politics until the dissolution of that party; was a conservative at the close of the civil war, and has for a number of years been identified with the Democratic party. He has been for over thirty years actively connected with the Methodist Episcopal Church South, is prominent in some of the social organizations of the day, has been largely identified with all movements of interest in the community, and is one of the ablest lawyers and most valuable citizens in his part of the State. Judge Ireland was married July 4, 1848, to Miss Pamelia D. Robb, of Lewis County, Ky. They have three living children: Virginia L., Wife of Rev. John W. Hampton, of Ashland; Sallie D., wife of Edward S. Norton, a prominent hotel man, and Samuel R., a law student at Ann Arbor, Mich.