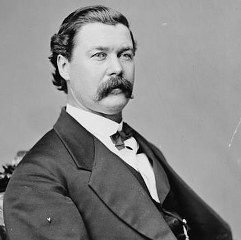 From Wikipedia, the free encyclopedia

John McConnell Rice (February 19, 1831 – September 18, 1895) was a United States Representative from Kentucky. He was born in Prestonsburg, Kentucky where he received a limited schooling. He graduated from a Louisville, Kentucky law school in 1852, was admitted to the bar in 1853, and commenced practice in Pikeville, Kentucky.

Rice was elected as a Democrat to the Forty-first and Forty-second Congresses (March 4, 1869 – March 3, 1873) but was not a candidate for renomination in 1872. Rice and John T. Zeigler disputed the November 1868 election, and the seat was vacant while in dispute. After leaving Congress, he resumed the practice of law in Louisa, Kentucky and was appointed judge of the Lawrence County, Kentucky criminal court in 1883 and was elected to the same office in 1884. He was reelected in 1890 and served until his death in Louisa, Kentucky in 1895. He was buried in Pine Hill Cemetery.