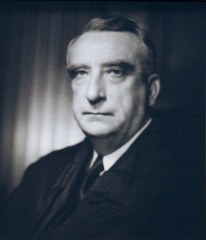 Frederick "Fred" Moore Vinson (January 22, 1890 – September 8, 1953) was an American Democratic politician who served the United States in all three branches of government. The most prominent member of the Vinson political family, he was the 53rd United States Secretary of the Treasury and the 13th Chief Justice of the United States.

Born in Louisa, Kentucky, he pursued a legal career and served in the army during World War I. After the war, he served as the Commonwealth's Attorney for the Thirty-Second Judicial District of Kentucky before winning election to the United States House of Representatives in 1924. He lost re-election in 1928 but regained his seat in 1930 and served in Congress until 1937. During his time in Congress, he became an adviser and confidante of Missouri Senator Harry S. Truman. In 1937, President Franklin D. Roosevelt appointed Vinson to the United States Court of Appeals for the District of Columbia Circuit. Vinson resigned from the appellate court in 1943, when he became the Director of the Office of Economic Stabilization. After Truman acceded to the presidency following Roosevelt's death in 1945, Truman appointed Vinson to the position of Secretary of the Treasury. Vinson negotiated the payment of the Anglo-American loan and presided over the establishment of numerous post-war organizations, including the International Bank for Reconstruction and Development and the International Monetary Fund.

After the death of Chief Justice Harlan F. Stone in 1946, Truman appointed Vinson to the Supreme Court. To date, Vinson is the last Chief Justice nominee nominated by a president from the Democratic Party to be confirmed. Vinson dissented in the case of Youngstown Sheet & Tube Co. v. Sawyer, which ruled against Truman's seizure of the nation's steel mills during a strike. He ordered a rehearing of the Briggs v. Elliott case, which was eventually combined into the case known as Brown v. Board of Education. Vinson unexpectedly died of a heart attack in 1953.